The Difference Between “Good” And “Great”

I often find myself asking what the difference is between a film being “good” and” great.” Why is it that I don’t look at a film like “Thor” as highly as I do films like “12 Years A Slave”? What separates these into different categories of movies?

This is a question that I have a difficult time answering, especially since my criteria keeps changing, depending on the film. One of my fundamentals of film criticism is watch the film on its own terms and let it speak for itself. To not compare it to any other existing work. As much as I’ve broken this rule in the past, like with “Frozen” and “The Bishop’s Wife,” I do try to stick to it.

I guess a better term for it would be a guideline, instead of a rule.

The difference between “good” and “great” is going to vary from person to person. To me, it is all about a state of mind and how each word makes you feel. “Good” is pleasing, positive and uplifting. While “great” is inspiring, motivational and ecstatic. I feel the same way about those movies which fall into the same categories.

An example of a good movie would be “Cowboys & Aliens.” It is a by-the-books, fun, and enjoyable ride from start to finish. It does not really stumble at any point, but it understands the ridiculous situation that it has presented and just takes that ride for all it is worth. It is a well-made, good-looking popcorn film that does not disappoint.

While for great movies, on the other hand, I’ll use my go-to pick, “Jaws.” While on the surface it may appear to be another popcorn film, it becomes something far more by adding character to itself. “Jaws” stands out above other films because of its atmosphere of tension and dread of an impending shark attack. We know something is lurking beneath the water and it can rip us to shreds, but when and where will it strike? It tries to be like a Hitchcock film, while still having the friendly and inviting atmosphere of a Spielberg film.

Perhaps that is the main difference between these two types. A good movie will merely try to entertain the audience to the best of its ability, and normally succeeds. A great movie, on the other hand, will not only entertain, but enlighten. To add character and depth to an already good idea.

Does this mean that popcorn films like “Thor” and “Cowboys & Aliens” can only be good movies? I don’t think so. It is difficult, but some of the better mindless action films I’ve seen have proven to revile in their ideas that I fall in love with them for their heart and effort.

For example, I believe “The Avengers” and “Pacific Rim” are just popcorn films, but goddamn if they aren’t the best popcorn films I’ve ever seen. They understand their genre and what makes it so unique from any other type of film, and focus their time and efforts on those aspects. This makes the films not just fun, but also honest and one-of-a-kind. They are simple, but filled to the brim with passion and admiration for their craft. I love them for that. 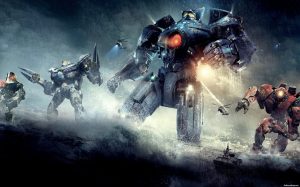 In fact, love is a big, unspoken part of this topic. Whether the filmmakers love for cinema is translated onto the screen or I simply fall in love with a movie, it plays a part in how I see the film. It is difficult to consistently entertain an audience, but it is even harder to get them emotionally invested and care about your story. It is why I love a good movie, but why I also have even more respect for a great movie.

One last note worth mentioning is the lasting effect that a particular film as on me. While a good movie might entertain me while it is on, it doesn’t leave much of an impression on me when it is over. I might recall events from the film and how much I liked certain scene, but not much else. While a great film will be stuck in my head for days or weeks after I watch it. Not just scenes or moments that stuck out, but what the film was trying to say and how it presented it. How the film moved and looked, and the style of its presentation.

In a film like “Django Unchained,” its not the gory shootouts or constant swearing that sticks with me, but the quiet and more somber moments that Django and Doctor Schultz share as they discuss their plans or even a German fairy tale. The scenes that take the time to let the film breath and speak for itself. The conversations feel real and genuine that you believe and care about every word they say. That is the mark of a great movie.

So, in the end, it honestly depends on each individual movie. Yet, there is a distinct difference between “good” and “great.” If I were to describe what it is that separates the two, it would be character and an understanding of cinema. While there is certainly nothing wrong with a good movie, it is better to be a great one. But, with my rating system, it’s even better to be a fantastic one.