Sonny Weaver Jr. (Kevin Costner) is the General Manager of the Cleveland Browns. The Browns are one of the most storied franchises in the NFL since their inception in 1945 up until their relocation to Baltimore in 1995. The Browns returned to Cleveland as an expansion team in 1999, retaining the team name, colors, history and championships, but the Browns haven’t found much success in 15 years.

The film follows Sonny during the 12 hours leading up to the 2014 NFL Draft as he attempts to rebuild the Browns into a successful franchise after many years of failure. The Browns own the #7 overall draft pick, but pressure from team owner Anthony Molina (Frank Langella) to make a news splash prompts Sonny to make a trade with the Seattle Seahawks for their #1 overall pick, sacrificing Cleveland’s first round draft picks for the next two seasons. The owner wants Sonny to draft the big name quarterback from Wisconsin, Bo Callahan (Jordan Harris), dismissing the need for the Browns to bolster up their defense by drafting highly scouted linebacker Vontae Mack (Chadwick Boseman). While members of the Browns draft management  like the idea of selecting the potential star quarterback, the news doesn’t go over well for the Browns head coach Vince Penn (Denis Leary). He argues with Sonny that the Browns need to focus on a running back named Ray Jennings (played by Houston Texans RB Arian Foster), in order to compete for a championship. Things get more complicated as the news of the Browns potentially drafting a quarterback alienates starting QB Brian Drew (Tom Welling), who demands to be traded if the Browns draft Callahan. As the draft gets closer, the pressure mounts on Sonny and affects the people around him, including his relationship with Ali Parker (Jennifer Garner), a salary cap manager for the Browns. When the draft approaches, Sonny has a big decision to make and it could make or break the success of the Browns… and his job.

Let’s just get this out of the way: it’s obvious that Draft Day is the NFL’s answer to the success that was Major League Baseball’s Moneyball (2011) starring Brad Pitt as Oakland Athletics GM Billy Beane. While Moneyball is based off real events, Draft Day tells a fictional story despite using real NFL history, highlights, NFL players, ESPN and NFL Network personalities (such as Chris Berman, Jon Gruden, Mel Kiper Jr., Mike Mayock, and Rich Eisen), the actual venues and logos for the 2014 NFL Draft, and Commissioner Roger Goodell as himself.

I personally have not seen Moneyball at the time of this review, so I can’t do much with the comparisons between Moneyball and Draft Day. The film appeals to the NFL fans, so I can’t say that a common, non-NFL fan (or sports fan in general) will appreciate the film. I’ve been an admitted Seattle Seahawks fan for the past 16 years, so of course I had interest in the film, especially since  the NFL endorsed the movie, suggesting that the writers of the film would attempt to make the process appear realistic as possible to movie viewers. 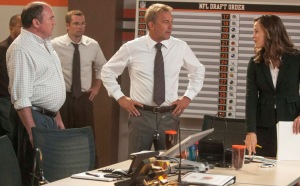 Kevin Costner and Jennifer Garner in the Browns war room in Draft Day.

In terms of the football content, football fans will enjoy the movie. It gives an idea of the pressures that a General Manager can endure, especially working with a losing franchise like the Browns. Aside from the real set they used for the location of the NFL draft, the filmmakers used the actual Browns facilities and featured real Browns players.

While it was intriguing to see what goes on when the team is not playing on Sunday afternoon, the viewer has to keep in mind that the story and events involving these real teams are fictional. Considering the Seahawks recent run of success, including a Super Bowl victory this past February, it was difficult to set aside fact from the fictional Seahawks (especially when images from a successful 2012 season are hanging around the office) portray Seattle as in dire need of top draft picks to be a successful franchise. Apparently, these Seahawks weren’t smart enough to find late round or un-drafted rookies to be successful (look up Richard Sherman, Byron Maxwell, Malcolm Smith and Russell Wilson).

Draft Day could have been better executed as a “based on a true story” film or as a documentary like the Canadian series Oil Change. For those that don’t know, Oil Change follows the rebuilding process of the Edmonton Oilers hockey club, providing exclusive behind-the-scenes access to how a pro hockey team works. The series, currently in its 4th Season at the time of this review, shows the draft process that Edmonton’s General Manager and scouts go through to scout potential talent leading up to draft day. The series even shows what happens after the draft, such as player training, coaching strategies before, during, and after games, practices, how players deal with travel to other cities, and even what players do when they’re not on the rink.

And before anybody brings it up, it is true that the NFL has a similar series called Hard Knocks, but it only shows a team from training camp up to the first game of the regular season, missing out on the opportunity to show viewers what goes on during a team’s draft day and what goes on for a team during the regular season. A movie like Draft Day could have been a brilliant documentary film for fans who want to know what goes into a real NFL draft rather than a fictional one.

Based on a film standpoint, Draft Day is underwhelming and falls short of being an iconic Costner sports film such as Bull Durham, Tin Cup, or Field of Dreams. Despite it’s shortcomings, Draft Day is still an entertaining movie and Costner’s role is performed wonderfully. While the film is good (especially if you keep an open mind), it’s not worth the $9 price of admission. Save your money and wait for it to come out on DVD, even if you are an NFL fan.