While turning books into movies is nothing new at this point, a recent trend in Hollywood has been to take the last book in a critically acclaimed series and turn it into multiple movies.

This phase in Hollywood began when adapting “Harry Potter And The Deathly Hallows,” the finale of the seven Harry Potter books. At the time, it made sense. The series had lasted this long, had been filled to the brim with memorable characters and needed proper buildup to the final climatic battle between Harry and Voldemort. Furthermore, this way they could add in even the minor scenes in the book that would otherwise be cut from the film, so you’re pleasing both diehard fans of the movies and the books.

But then they started to go a bit more crazy with it.

This recently happened with finale in the Twilight franchise, “The Twilight Saga: Breaking Dawn.” The Twilight film series has far less ground to stand on than the Harry Potter movies, because by comparison, the source material is much more lively and captivating, the world is far more fleshed out and the characters are likable. Not to mention, the Twilight films are laughable at best and painful at worst.

So to break up the last book into two movies does not seem like a way to talk about the novel’s points in greater detail, but just as a way to cash in on a fade and make twice the money they would have otherwise.

Then you get an upcoming attempt to do this with the last “Hunger Games” book, “Mockingjay.” Yes, there are going to be four “Hunger Games” movies, even though there should only be three. This one also doesn’t get me excited, because I still feel that the idea of the Hunger Games has been done many times before and done better, like “Battle Royale.” Though “Hunger Games: Catching Fire” did do something new and added some charm to this otherwise uninviting world, I’m not holding my breath with either “Mockingjay” films. 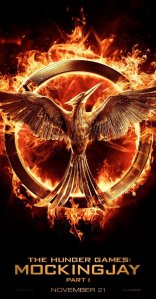 The worst offender of this trend is Peter Jackson’s attempt to adapt “The Hobbit.” By far. Not only has he decided that to go back to Middle Earth and do a prequel to his excellent “Lord Of The Rings” trilogy, but he has decided to take one novel, and turn into three movies.

I have just one question for Mr. Jackson: Why? Other than the obvious answer of “money.”

Let’s put this in perspective. By comparison to any of the “Lord Of The Rings” books, with material and length, “The Hobbit” is miniscule. This novel isn’t even close to the length of just one in that massive trilogy. Yet Jackson was able to take all three books and turn each one into its own movie. Granted, each movie is close to four hours long, but to be able to cram so much of a gigantic book into that time span is a wonderful achievement. 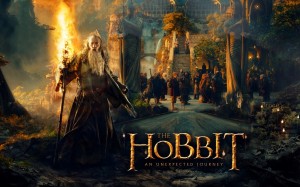 So how is that a book much shorter than any of the “Lord Of The Rings” trilogy must be turned into three movies, with each movie lasting over three hours?

There’s a point where covering every part of the novel just is not a good enough reason to make us wait well over six hours of film just to get to Smaug finally attacking a town. Is it really necessary to add Legolas to the story? Or Radagast?

At some point, it stops being entertaining and becomes merely a test of patience. Fans of the novel might eat it up, but others just keep looking at their watches waiting for something interesting to happen.

These types of films are being looked at as “adaptations.” Something based off of another source material being adapted to a different medium. I do not look at it like that. I see these merely as “movies.” A piece of entertainment done usually as a way to tell a story by camera, lighting, actors, editing, etc. As a film, I choose to look at the work on it’s own individual merits, without ever being compared to any other piece of work, including something that this particular work might be based off of. If the film stands or falls, it would be by it’s own words and values, not the values of others.

As such, this style of breaking up one book into multiple movies is unnecessary, annoying and only serves as a way to make lots and lots of money. I don’t care if the film is being as faithful to the source material as possible, that is not an excuse to make it longer an opera about turtles eating molasses in slow motion.

Just because you can add in every scene from the novel into your movie doesn’t mean you should. Cut these movies down. Edit out scenes that don’t add anything to story and don’t look back. Do not break it up into multiple movies just for the sake of money, but for your art form.