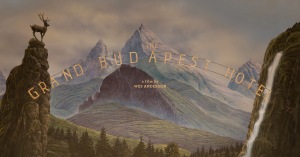 Warning: MAJOR SPOILERS IN THIS REVIEW

Synopsis: Wes Anderson (Moonrise Kingdom, The Royal Tenenbaums, Rushmore) returns with a comedy-drama featuring a concierge that tries to prove his innocence after he is accused of murder. He is assisted with the aid of his lobby boy and interacts with an abundance of other players.

We next see “The Author” recounting his story that takes the viewer back to 1968 when he meets the hotel’s owner, Zero Moustafa (F. Murray Abraham) and asks how he became the owner of the Grand Budapest. It is at this moment we head to the bulk of the story, back in 1932, when a young Zero (Tony Revolori) was just a lobby boy.

It is understood that Gustave (Ralph Fiennes) is one of the best concierge’s in the world, and is known for his “exceptional service” – to those older women of blonde hair color, and their excessive needs. This is especially true for Madame D (Tilda Swinton), who is quite fond of Gustave, who leaves her famous painting “Boy with Apple” to him in her will.

However, Gustave is framed for her murder, and escapes prison to try and prove his innocence. It is during this period that Anderson shines the most, bringing in his usual suspects Owen Wilson and Bill Murray in great cameos, along with recognizable stars Harvey Keitel, Bob Balaban, Fisher Stevens, and others that help add sight gags and add a lot of comedic elements into the film.

There are a few small parts of the narrative that run a tad bit too long, but it was a gamble that Anderson went with, and is respectable for that. What works definitely overshadows what didn’t, and with great performances from Fiennes, Revolori, Jude Law, Adrien Brody, Jeff Goldblum, and countless others, it is obvious why The Grand Budapest Hotel is still in the Top 10 in the box office, even though it is out only in limited release.

The Grand Budapest Hotel is also a fun film to really look at Anderson’s directorial styling and his use of miniature models, aspect ratios (3 in this film), and the countless sight gags and references through the film. It’s a film that you might have to see at least twice to pick up on everything going on in the shot.

If you are a fan of other Wes Anderson works, this is definitely another classic in the making. If you haven’t seen too much of his other work, like myself, this film is a great one to start out with.