Wes Anderson often leaves a weird taste in my mouth, but I find this a good thing. You can immediately tell when you’re watching a Wes Anderson film just by the framing of the shot or the incredibly dry humor. He has a style of his own that may not always leave the best impression on an audience, but he is fully dedicated to it.

Most of his films feel like we are watching a play from inside of a doll house. The camera is always set up so that the actors are right in the middle of the shot, yet we still see the entirety of the room they are in, with much blank space. The actors also do no move unless they absolutely have to and often have blank or vague expressions on their face, much like a doll. 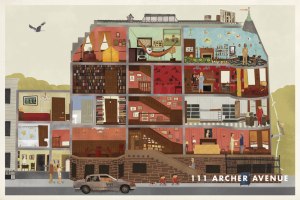 Yet this style of filmmaking works when given the right set of actors and atmosphere. Anderson has found just the right actors to make this work, which includes Bill Murray, Edward Norton and the Wilson brothers, Owen and Luke. Anderson takes full advantage of their delivery and comedic presence, which makes even the most vague expressions a laugh riot.

Anderson’s newest film, “The Grand Budapest Hotel” is exactly what we’ve expected from him in the past and delivers exactly what it promised: An ensemble cast, with that deadpan delivery that leaves you either laughing or intrigued.

Our tale is told from a flashback within a flashback, as a famous author (Jude Law) recollects a tale that the owner (F. Murray Abraham) of the once famous Grand Budapest Hotel told him and how this establishment came into his possession. This takes us to the 1930s, when Monsieur Gustave H. (Ralph Fiennes) was in charge of the hotel and took on a young lobby boy, Zero (Tony Revolori), as his apprentice. When one of Gustave’s many love interests passes away under mysterious circumstances and leaves a priceless painting to him in her will, suddenly her son Dmitri (Adrien Brody) wants Gustave dead and will do anything to stop him.

If there’s one thing that blew me away about “The Grand Budapest Hotel,” it was its ability to move so fast with deadpan humor. Most of the humor in this film comes from the expressions and reactions rather than the dialogue or actions themselves. Watching Jason Schwartzman simply raise an eyebrow and let out a quiet “Shit” as a costumer chokes on food can go a long way in this film.

I’ve always associated deadpan humor with how slow yet empty it can be. That they’ll eventually get to the joke, just don’t expect much. Yet “The Grand Budapest Hotel” keeps the style but moves at lightning fast speeds. Once a joke is made, the film quickly moves on to the next gag or plot point.

For example, Jeff Goldblum plays an attorney for the deceased old woman but is eventually hunted down by the family’s bodyguard, played by Willem Dafoe. They have an extended chase sequence through a museum and almost every shot is used to convey the intensity or the comical reactions of Goldblum being chased down.

The discussions between Gustave and Zero move at a brisk pace, which makes both of them seem intelligent and quick-thinking. This helps to set up the pacing once they are chased by Dafoe, Brody and the police, led by Edward Norton. These two are, as described by the writer, the last bastion of hope and sanity in a world that has become dark and cruel.

Everyone else in the movie is either caught up in greed and pride or devoted so much to their job that they can’t see it harming others. Yet Gustave and Zero are sophisticated, charming and caring. They always manage to find the bright side in a dark situation, even being trapped in prison.

The chemistry between Fiennes and Revolori is the highlight of “The Grand Budapest Hotel” as the experienced yet vague master of the hotel trains the willing and able assistant. He does not do it because he has to, but because he sees kindness in Zero. Perhaps, even a bit of himself.