Films I love, but everyone else hates 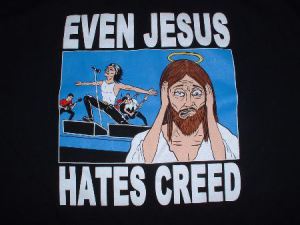 After writing my last post about films I hate but everyone else loves, I realized it would be fair if I touched on the opposite end of the spectrum. To discuss the films I genuinely enjoy but others despise.

I use the term “despise” loosely in this case. Most of these films received mixed reviews upon their release, but in the case of some I have seem reviews where critics hated the film. It is all a matter of opinion and no two critics are going to come out with the same feelings on one film. Such is the joy of art and discussing it, many things are open to interpretation and perspective.

Like the last one, if you do not like these movies, I completely understand. My comments are never aimed at those who like or dislike the films I look at, but merely the films themselves. How they made me feel, the impressions they left upon me and the experience of watching them. With that said, here are the films I love, but everyone else seems to hate.

Many of the negative comments I see on “The Hangover” are directed at the rude, unnecessary and gross humor of the movie. That there is far too many fart and dick jokes and not enough of any other kind of humor.

I felt the humor of “The Hangover” was varied and usually hit the right marks. Most of it lied in the creative premise of a bachelor party gone wrong and the attendees not remembering what happened, slowly being fed that information. That way the audience is in the same boat as the main characters, their reactions mimic our own and can even be funny in their own right.

Most of the characters are likable (except Zach Galifianakis who is a moron with no sense of reality) and they keep the film afloat. If it weren’t for Bradley Cooper and Ed Helms, this film would sink fast but their spontaneity keeps me interested.

Granted, I do think the sequels are crap, but thats more so because they are unimaginative and retread the same ground as “The Hangover.” No new jokes and more focus on Galifianakis, who is honestly the worst part of the first film.

For what it was, I enjoyed “The Hangover.” It kept me laughing and gave us an interesting and creative plot.

I’ve discussed this in my “Kick Ass 2” review, but I felt that “Kick-Ass” was the sleeper hit of 2009. Funny writing that was to the point, a diverse range of characters that kept you interested, a booming soundtrack with range, beautiful cinematography on the fight sequences and a stylistic approach to a coming-of-age story. I did not expect any of that going into the film but was impressed by how much work and passion was put into the film.

Most of the complaints I’ve heard against the film were against the second main character, Hit Girl. A thirteen year old girl who gets repeatedly beat up, shot at, tortured and nearly killed, but that isn’t afraid to kill someone in return.

My response to this is, if Hit Girl isn’t okay, then what does that make Alex DeLarge from “A Clockwork Orange”?

Alex is no different from Hit Girl. They both live in a world were violence and crime are the standard and each feel that, to survive, one must be violent and cruel. They both take joy in it, but only because they are so young that they don’t know any other way.

“Kick-Ass” isn’t being violent for the sake of being violent. It is giving us a story about a bleak and dark world where crime is rampant and has gotten so bad that normal people have decided to dress up like super heroes in an attempt to stop them. This film takes that premise as far as it can go, even if that route is bloody and violent.

This one is here because, for as long as I can remember, “Son Of Godzilla” has been one of the most despised Godzilla films. That feeling has died down a bit in recent years, but you still see some people who utterly hate this film.

I’ve tried to understand why and I feel there is only one thing that could make people hate this film: Minya, Godzilla’s son.

Some fans feel that Minya makes Godzilla look like a wimp. Like declawing a tiger, it would not have the same affect. For me, I look at it in a different light. Minya doesn’t weaken Godzilla, he gives Godzilla depth and emotion. It turns an otherwise brainless monster bent on destroying Tokyo into a caring character who wants to preserve his race.

A constant theme running throughout “Son Of Godzilla” is one of protecting the future. Not just so that we live better lives, but so our children can live a better life than us. The human characters are on a deserted island, conducting tests on a weather machine, but only wish to us it to make inhospitable areas of the planet suitable for vegetation.

This theme continues with Godzilla and Minya, as he trains Minya to be just like him. Only over the course of the film does he realize that Minya doesn’t want that and comes to respect and love his adopted son. For a daikaiju film, that is amazing to me. It isn’t exactly complex, but just the right amount to give Godzilla and Minya character and charm. I love this film for that.

Now, I understand why some would hate this film. It is a terribly made movie, with over the top acting, a nonsensical plot, laughable action sequences and lines that make you tilt your head in confusion.

For those very same reasons, I enjoy this film. “Ghost Rider: The Spirit Of Vengeance” is one of those “so bad, it’s good” films. One where you can admit that what you’re watching is crap, but you also laugh at its awfulness.

When I went to this, I went in with zero expectations and ended up having a blast. How could you not? It’s about a super hero with a flaming skull who rides around on a flaming motorcycle in leather clothes and if you stare into his eyes he will steal your soul. This is not made any easier when this ridiculous hero is played by the king of zany and over the top, Nicholas Cage.

Watch this one with a beer and some friends and you will have a great time. 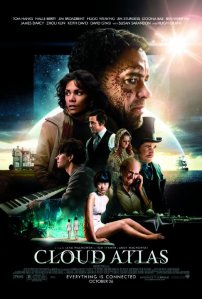 This one makes the list because, based on what I saw, reactions were split right down the middle. People either loved it, or they hated it.

I can see and understand both positions. The film is three hours long, it takes well over an hour before any of the six plots start to get interesting and you need a diagram to understand what is going on.

For that reason, I felt “Cloud Atlas” was almost an experience. Not unlike others, such as “2001: A Space Odyssey” or “The Tree Of Life,” this movie puts you in a state of mind where you aren’t so much along for the ride with the characters of the piece, but like this is all a memory of a long time ago. That you’re recalling these events rather than witnessing them.

I also feel that, for a film that contains six different stories, three hours is amazingly fast. Not once was I bored or uninterested and each piece moved at a fine pace.

“Cloud Atlas” impressed me so much that I felt it was the best film of 2012. It was unlike anything I had ever seen or since and it was an achievement on so many levels. Not just story telling or effects, but on a subconscious level.