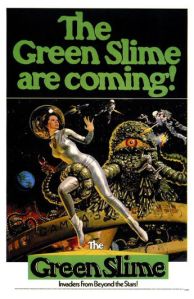 It is always fascinating to see two entirely different nationalities work together on a film. While it shows the love of cinema knows no bounds, there is always the problem of the language barrier during production.

This is especially the case with the Japanese, as their films are more about subtlety and being somber than anything else. So when you combine them with the over the top action-packed Americans, something is bound to get lost in translation.

Take for example the little-known film “The Green Slime,” which was produced by an American studio and stars American actors, but was filmed entirely in a Japanese studio with several key filmmakers being Japanese. Most notably being the director, Kinji Fukasaku.

Fukasaku had a long and outstanding career in both Japan and America. In his native land, he directed in several genres, most notably the Yakuza genre (Japanese Gangster) from the 1960s through the 2000s, creating films such as “The Graveyard Of Honor,” “Under The Flag Of The Rising Sun,” and “Battle Royale.”

This consistently got the attention of American filmmakers, as they kept asking for his services. His most notable work in America would be directing the Japanese segments of “Tora! Tora! Tora!” A job that was originally given to famed director Akira Kurosawa, but he turned down due to creative differences.

I like to think of Fukasaku as the Japanese equivalent of Martin Scorsese. He is always willing to give any type of film a shot, and wants to touch all sorts of genres, even the less desirable ones. Yet he always finds a way to add a creative edge to his work that makes his films worth watching.

In the not too distant future, humans live peacefully and have advanced so far in technology that scientists aboard the most advanced satellite have run out of things to do. That changes when a giant meteorite is heading towards Earth and we only have a day before it destroys everything.

Without going through an elaborate plan to send miners to blow up the meteor like in “Armageddon,” the government quickly sends a team of astronauts to dispatch the meteor. What they find on the surface of the meteor might be just as dangerous.

What I noticed most about this work was how it felt exactly like the work of an Ishiro Honda daikaiju film. Honda’s films, most notably the Godzilla films, had elaborate sets, expansive miniatures, carried themes of unity through the nations yet still had a fear of the beyond the stars.

All of that is present in “The Green Slime.” Even more so, it seems like pieces and sets were taken directly from Honda films. The first third of the film revolves around stopping the meteor, something that Honda did with one of his more somber and quiet pieces, “Gorath.”

The monsters in this film start out at a microscopic level and consume anything they touch. This is also similar to “The H-Man” or even “Matango,” both films directed by Ishiro Honda.

Even the set of the meteor looks similar to a slightly colored version of the Planet X set from “Godzilla vs. Monster Zero.”

Perhaps I’m reading too much into it and noticing similarities that are merely coincidences. The way I see it, this is not an attempt to rip off the works of Ishiro Honda, but to praise them.

The movie never attempts to parody these situations or ridicule the work of other Japanese filmmakers. There is an air of competence throughout the film, always taking everything seriously, even down to the scientific explanation of how these alien creatures can grow.

As such, “The Green Slime” comes across like a tribute to the kaiju films of the past and all the zany situations that come from them. It is fun, even if a little silly at times, but never so much that it becomes cheesy. The actors are competent in their performances even if the story is straight forward. 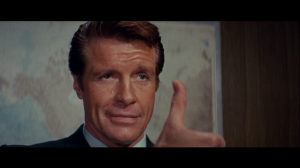 If you like science fiction or Japanese films, give this one a shot. If you couldn’t get into the Godzilla films or think something like this is overdone, then this isn’t for you.