First Image of “The Flash” Released 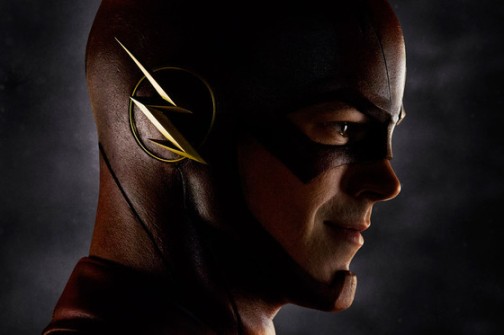 Gustin’s version of Barry Allen was introduced during the 2nd season of Arrow, playing an assistant CSI for the Central City Police Department. In his last appearance on the show, his character was struck by a red bolt of lightning which put him into a comatose state. His story will continue in the Pilot episode of The Flash, due to air on the CW Network in Fall 2014.

Warner Bros. made the following statement about the Flash costume:

The costume for The Flash was designed by three-time Oscar winner Colleen Atwood, who also designed the costume for “Arrow” and whose motion picture credits include Academy Awards for her work on “Alice in Wonderland,” “Memoirs of a Geisha” and “Chicago,” as well as seven additional Oscar nominations for films such as “Snow White and the Huntsman,” “Sweeney Todd: The Demon Barber of Fleet Street” and “Sleepy Hollow,” among others

Grant Gustin becomes the fifth live action portrayal of The Flash. The first actor to play Barry Allen/The Flash was actor Rod Hasse in NBC’s 2-Part TV Special Legends of the Superheroes in 1979. 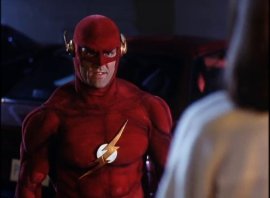 In 1990, CBS debuted The Flash, starring John Wesley Shipp as Barry Allen/The Flash. The hour-long series lasted for one season and consisted of 22 episodes.

The most recent version of The Flash appeared on The WB/CW TV series Smallville with Kyle Gallner playing Bart Allen/Impulse. Although the character goes by a different name, Bart shared qualities with the various versions of The Flash in the comics. The series also acknowledged the existence of Jay Garrick, Barry Allen and Wally West, indicating there was more than one version of The Flash.

It is also worth noting that John Wesley Shipp will appear in the Pilot episode of The Flash, but his role is currently unknown. Whether or not there will be a reference to his version of The Flash remains a mystery.

Sound off Comic Book Nerds! What are your thoughts on the new Flash and his costume? Will this version of the Flash and Green Arrow appear in the DC Cinematic Universe, or is this the start of a massive DC Television Universe?