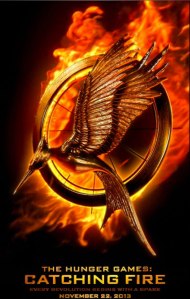 One of the most talked about movies from last year was “The Hunger Games” for its unique story, diverse world and the performance of Jennifer Lawrence as Katniss Everdeen.

I didn’t care for the film at all. While some praised it for the story, I knew I had seen this a dozen times before and done so much better in films like “Battle Royale” which prided itself on developing every one of the children involved by showing just what each of them would do to survive this game. 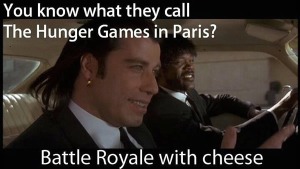 “The Hunger Games: Catching Fire” on the other hand does not tread the same path as its predecessor. It takes the time to develop its unique and divided world, showing how one act of survival can change an entire nation. While it does eventually get to the titled game itself, the film truly shines when its not focusing on competition, but survival.

After the events of the first film, Katniss (Lawrence) and Peeta Mellark (Josh Hutcherson) are now traveling around the twelve districts of their nation as the winners of the most recent Hunger Games. Some of the districts have taken Katniss’ final actions in the games as an act of defiance, while others an act of rebellion, causing riots and anarchy to run rampant. President Snow (Donald Sutherland) has not taken kindly to this and plans to tarnish Katniss’ image as a symbol of hope by whatever means necessary, including putting her into the next Hunger Games.

One thing I’ll give the film is that President Snow and his associate, Plutarch Heavensbee (Philip Seymour Hoffman) are quite intelligent at the ways of bringing down Katniss. Through their actions of increasing public executions and media focus on her, they’re making her look as if she’s siding with them rather than with the rebels. They’re not influencing her decisions or hurting those near her. They are simply exploiting her weakness towards helping the helpless.

Lawrence again turns in a stellar performance as Katniss. She makes it clear early on that she only sees herself as “stubborn and good with a bow” but as the movie develops there is clearly more to her than that. In a scene where she meets the other contestants in the games, she takes the time to help out many of them and get to know them, something she despised doing in the first film. Katniss is now a caring person who just wants what is right for the world.

But the strength of film comes from its moral center, especially compared to the first film. In that, Katniss choose to offered as a contestant to protect her sister, with everything else being an act of survival. To make it back to her sister.

Now those actions have been twisted. Selflessness has turned to defiance, which cannot be tolerated. Even her sister has begun to think that Katniss’ actions were not to protect her, but so that she could fight and give purpose to her own life.

Now it’s a game of survival, but of a different kind. Katniss’ mentor, Haymitch (Woody Harrelson) summed it up very nicely when he said that there are no winners in the Hunger Games. Only survivors. Now those survivors must continue to do what they can in an unforgiving and brutal world.