The CW orders supersized 2nd season of “Whose Line”

THE CW ORDERS SEASON TWO OF THE HIT COMEDY “WHOSE LINE IS IT ANYWAY?” 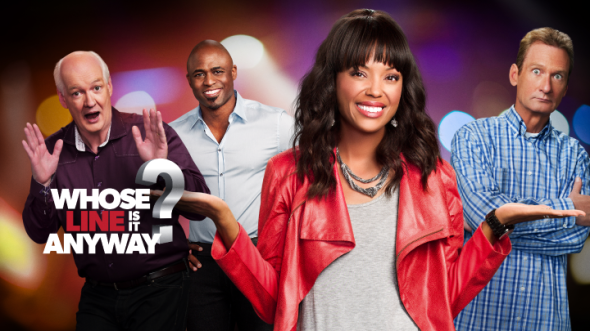 July 29, 2013 (Burbank, California) – The CW will keep the laughs coming, giving its hit improvisational comedy series, WHOSE LINE IS IT ANYWAY?, a second season order of 24 all-new, half-hour episodes, it was announced today by Mark Pedowitz, President, The CW. The premiere date and time for the second season will be announced at a later date.

“It’s clear that viewers are as excited to have ‘Whose Line’ back on the air as we are,” said Pedowitz. “We have wanted to bring comedy back to The CW for a long time, and Aisha, Wayne, Colin and Ryan have brought funny to the network in a big way. We’re very excited to have them back for another season.”

WHOSE LINE IS IT ANYWAY? returned to the airwaves with a bang this summer, with its premiere delivering The CW’s most watched show (2.9 million viewers) in its time period (Tuesday, 8 p.m.) in nearly five years, and was the network’s most watched unscripted series premiere in six years.

The CW’s WHOSE LINE IS IT ANYWAY? features the return of Ryan Stiles, Wayne Brady and Colin Mochrie, who along with a special guest each episode, must put their comedic skills to the test through a series of spontaneous improv games. Prompted only by random ideas supplied by the studio audience and host Aisha Tyler, our four performers must use the little information they have and their wild imaginations to depict different characters and an array of scenes, as well as perform songs. After each round of improvisation, Aisha doles out points to our four performers and declares a winner at the end of every episode.

Based on the wildly successful U.K. format, which also spawned a previous incarnation in the US that ran for eight seasons on ABC, WHOSE LINE IS IT ANYWAY? is executive produced by Dan Patterson, Mark Leveson, Jimmy Mulville, Ryan Stiles and Wayne Brady. Co-created by Dan Patterson and Mark Leveson, WHOSE LINE IS IT ANYWAY? is from Angst Productions and Hat Trick Productions.