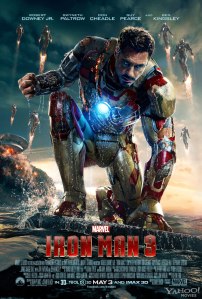 Synopsis: After the events of The Avengers, Tony Stark (Robert Downey, Jr.) is dealing with anxiety issues and must face off against the terrorist the Mandarin (Ben Kingsley).

Flash forward to 2013, and Killian is seemingly cured and offers Pepper (Gwyneth Paltrow) a chance to buy into his company. While impressed with Killian’s Extremis prototype that heals wounds and helps regenerate body parts, Pepper rejects his offer much like Stark did years ago, leaving Killian in disappointment.

While Pepper is running Stark Industries, Tony is back home, stressed and not sleeping due to the events in New York. Instead of sleeping, Tony is building more and more prototypes of the Iron Man suit. This is causing a strain in his mental state, and his relationship with Pepper.

It is during this time that the Mandarin is causing terrorist attacks across the country and Tony Stark threatens to kill him. This puts Pepper in danger, and during a battle, forces Tony out to rural Tennessee. While in Tennessee, he befriends preteen Harley (Ty Simpkins) who helps Tony try to regain his confidence and ability to finally stop the Mandarin.

Iron Man 3 sets the tone for a great second chapter in the Marvel Cinematic Universe franchise. Thanks to The Avengers, the film boasts a good combination of comedy, action, and just a hint of sci-fi that makes the film spectacular.

At a shade over two hours, the film gives Rhodey (Don Cheadle), Pepper, and many of the other supporting characters plenty to do. The subplots and twists will keep you near the edge of your seat throughout the film, and the chemistry between the ensemble is clearly evident.

With Thor: Dark of the World ready to hit theaters late this fall and Captain America: The Winter Soldier set for next spring, the stage is set for even bigger things than thought possible after Phase I.

By the way, definitely stay for the post-credits scene. It is definitely worth the wait.