I’m quite pleased to say that if you would like to see a movie in theaters, The Host should be one of those movies. Having had to sit through the Twilight series, I was intrigued by this adaptation of Stephanie Meyer’s not as popular work of fiction that shares its title with the film. This is a welcome departure from Twilight that I think is worth seeing, especially if you had a mild curiosity like I did. 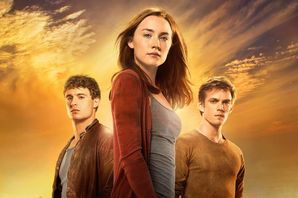 From the get go, the film takes its place in a sci-fi realm due to the fact that Earth has suffered an invasion of sorts. Humanity has been taken over by life forms that are symbiotic in nature, leaving only very small pockets of humanity unaffected. Melanie is one of those few humans, until she too is captured. This is not the end for her, as the symbiotic alien that inhabits her body finds out, some souls are far stronger than others.

Without wanting to ruin the story for you, the plot is decent. More than decent, actually. It has a depth that is surprising if you’re willing to think past what it presents at the surface and that’s a wonderful feeling. Yes, there is romance, and that romance gets complicated in interesting ways. There is a little bit of action which steps up the pace between the slower scenes.

When thinking about this film, I think it best to keep an open mind. What I mean to say is that most of us are aware that author Stephanie Meyer penned the story that this film is an adaptation of. Does that mean it is Twilight 2.0? No. Does that mean it is a direct translation of the book? No. Is it possible that we are given a different type of story that presents different ideas, flaws, and solutions? Yes, and I think the film does a good job of it.

My rating for it: It’s a nice blend of science fiction and drama. It ask questions about humanity and the soul, and we see new ideas on the subject through the film. That is more than enjoyable and I think worth the price of admission.