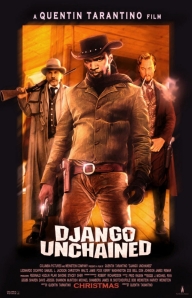 Where to start with this beast…

Alright, I’ll begin here. Mr. Tarantino has always hinted at, and more recently, shouted his interest in spaghetti westerns and their influence upon his filmmaking. The nazi-hunting in Inglourious Basterds for the mere sport of collecting their scalps and those intensely red sprays of crimson throughout the film, have Leone written all over them. Though Kill Bill was more of a tip of the cap to Kurosawa, the soundtrack featured explicit Ennio Morricone tracks that were used in the Man With No Name trilogy. Whenever he is asked to list his favorite films, The Good, the Bad and the Ugly is always there at the top. It’s as if QT was ramping up for an epic western or something. Oh…

I was pretty excited (as I always am for his movies) going into this one. I listed it in the films of 2012 that I still wanted to see a week ago – and I wish I had waited to write that list. This film is an absolute, deranged brute. It runs a little under three hours but chugs along fast enough to make you salivate for more. Django “the D is silent” Unchained is a classic spaghetti western in every sense. I’m not going to get into the controversies brewing concerning the portrayal of slavery, because I simply feel it’s not my place. I don’t like spoiler reviews, so I won’t subject you to a frame by frame recollection of the film. I will however, try my best to express why you need to see this film because of what it is – a damn good spaghetti western.

Django Unchained is so damn good because it begins by introducing you to characters you actually care about. Dr. King Schultz, portrayed absolutely masterfully by Oscar winner Christoph Waltz (Inglourious Basterds), is a dentist turned bounty hunter seeking out Django to help him with a bounty of three slave-owning brothers. Jamie Foxx plays Django, a slave set on revenge and the location of his wife. The friendship between Django and Schultz ends up becoming one of the best parts of the film and one of the best pairings in cinematic history.

The violence in Django Unchained is undoubtedly one of the most talked about components of the film. Trust me when I say it’s satisfying. Gratuitous would probably not be a word to do it justice. By the end of the film, it seemed as though a small ocean of blood had been emptied into each shot. Those not accustomed to Tarantino’s canon should probably prepare themselves for an immense dose of blood. Those who are familiar, prepare yourselves as well. At times, it seems the blood is splashing onto the lens. Word is QT newcomer Leonardo DiCaprio, playing the deliciously evil Calvin Candie, smashed his hand on a shard of broken glass in a very intense scene, and actually cut himself pretty bad. He continues the scene and uses the real blood streaming down his hand to improvise upon another character’s face.

Equally satisfying is the film’s dialogue. Tarantino has always had a knack for writing some of the best, longest and strangest conversations into his films, yet they seem unforced, unlike that of say, Diablo Cody. The Best Supporting Actor Oscar that Waltz received for Basterds is definitely going to show up in his hands again in February, unless DiCaprio can somehow steal it from him. Foxx fills the Man With No Name shoes well, and delivers some of the best one-liners in recent memory for a leading man. One of the most frightening characters in the film is Stephen (Samuel L. Jackson), Candie’s “house-slave,” that serves as the head of all the plantation’s slaves. In some scenes it’s hard to remember that it’s Jackson in that old man’s costume and some of the exchanges between him and Foxx are chilling.

By the end of the film, I wanted more. Many controversies have erupted in the wake of this film’s release and frankly, I’m not surprised. The N-word is used over 100 times and very liberally in some of the conversations. It can be uncomfortable at times, but I think the film is intended to make the viewer uncomfortable. Director Spike Lee has publicly called for a boycott of the film, saying on Twitter, “American Slavery Was Not A Sergio Leone Spaghetti Western. It Was A Holocaust. My Ancestors Are Slaves. Stolen From Africa. I Will Honor Them.” While I mentioned earlier I wouldn’t like to elaborate on these controversies within the film, I will say this: In the realm of film, especially in our age of Twilights and Harry Potters, it’s refreshing to see that a movie can still stir a controversy and make us think about where we are, without battling teenage werewolves or casting dastardly spells.

Don’t miss this one.