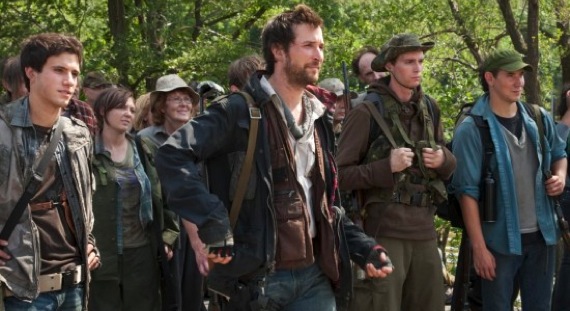 Not that it should come as a surprise to anyone, but TNT has renewed their top rated 18-49 series Falling Skies for a 10-episode third season. While the ratings are down slightly from last year, critics have praised this season being creatively better than the first. Here are some blurbs from the press release:

“Falling Skies is television storytelling at its very best, a powerful drama that’s told on both an epic scale and on a deeply personal level,” said Michael Wright, president, head of programming for TNT, TBS and Turner Classic Movies (TCM). “With all the memorable and surprising moments taking place during the second season of Falling Skies, we can’t wait to see what DreamWorks Television and Falling Skies‘ terrific production team and cast members have in store for season three.”

TNT’s announcement that Falling Skies has been renewed for a third season comes just as the cast prepares to make an appearance at Comic-Con in San Diego. Series stars Noah Wyle, Moon Bloodgood, Will Patton, Drew Roy, Connor Jessup, Colin Cunningham and Sarah Carter, along with executive producer Remi Aubuchon, will join moderator Wil Wheaton for a panel session on Friday, July 13, at 4:30 p.m. (PT) in room 6BCF at the San Diego Convention Center. An au tograph signing will follow at the Dark Horse Comics booth at 6 p.m. (PT). TNT has partnered with Dark Horse Comics on a number of Falling Skies initiatives, including a prequel comic book that preceded last year’s series premiere.

In its debut season last summer, TNT’s Falling Skies topped the charts as basic cable’s #1 new series of 2011. This year, the show is off to a strong start, averaging 5.9 million viewers in Live + 7. It has also scored 2.7 million adults 18-49 (L+7) and ranks as basic cable’s #1 drama for the summer-to-date in that ke y demo. The show has brought in 3.1 million adults 25-54, ranking it behind TNT’s Dallas as basic cable’s #2 summer drama. On the international front, Falling Skies premiered in more than 115 global markets last year, achieving hit status in the United Kingdom, Australia and Latin America, among others. Last year’s launch of Falling Skies also ranked as the biggest series premiere ever for TNT networks in Spain, Germany and Austria.

Fans are still holding out to see if the legal drama-comedy Franklin & Bash will return for a third season as well, with sources and ratings pointing to a yes.