10. Elite Squad: The Enemy Within

Director Jose Padilha directs this fantastic action/crime thriller which further proves that sequels can be better than their predecessor. Like the HBO series The Wire, this film focuses on the corruption within the justice system and how politics and the human greed are the root to all evil. As Captain Nascimento tries to clean up the streets of Rio, he creates even more unforeseen problems than he ever expected. A story that is enthralling and is important to the times, the film moves along at a Goodfellas pace and focuses on as many characters. Always exciting and realistic. I loved it.

9. The Adventures of Tintin

After the absolute disaster they called Kingdom of the Crystal Skull, I was becoming worried that Spielberg was starting to lose it. Luckily, with The Adventures of Tintin, my faith is restored in the great director. Given a decent script, Spielberg is able to craft a fast-paced and fun adventure picture without losing any of the story. Yes, the motion capture in the film is fantastic and it is very loyal to the classic comics, but the real star of the film is the camera. Spielberg utilizes animation in an unbelievable fashion, most notably with his camera. The cinematography in this film is simply something you need to see to believe. I had such a great time with this film and was really taken back to when I was a kid discovering Indiana Jones for the first time; though not as classic or effective, it is nostalgic fun. 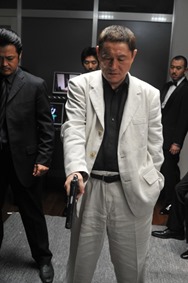 Takeshi Kitano has been involved in some of the great Japanese films to come out in the last 20 years; such as Zatoichi: The Blind Swordsman and the Battle Royale films. With Kitano’s latest directorial effort, Outrage, is among some of his best. The film focuses on a number of families tied to the Yakuza gang, all looking to be the next boss of the major crime syndicate. As the betrayals and lies pile up, so do the bodies. For the most part, Outrage is a quiet and mature gangster film, with splashes of brutal, yet realistic, violence. Kitano’s direction is steady and elegant, he clearly has a knack for filming his most violent scenes. The film tells a good story featuring some effective performances, and Kitano keeps it fun.

Watching The Artist was one of the most fun times I had at the theater this year. While the film is a lot of fun itself, I believe the majority of the love for this film comes from the nostalgia it brings out. I know this was a very big factor for me, watching it brought me back to when I was a kid watching old films with my father. I was happy to allow my girlfriend to share this same experience as she had never seen a silent film before and had not gotten to see the magic of classical filmmaking. Everything about this movie just works, the performances are amazing, the direction is confident, and the story is interesting and heartfelt. This is clearly a film made by someone with a great passion for old Hollywood. The Artist’s only downfall is the fact that if it were not a silent film in black & white, it would not be anything outstanding. Overall, it is a cute and fun movie that can be enjoyed by almost everyone.

6. The Girl with the Dragon Tattoo

David Fincher’s films are always something that must be seen. After his ridiculous snub last year at the Oscars when he lost Best Director, Fincher has decided to return to his dark roots where he truly thrives. Films like Se7en and Zodiac are two modern classics in the serial killer genre, with Se7en being his masterpiece. The Girl with the Dragon Tattoo is a strong addition to a master’s filmography. This is one series that I believed desperately needed a reboot, and Fincher is the perfect director for the series. What the original Swedish films severely lacked was style and polish, leaving them to feel more like television movies and less like a cinematic experience. This is exactly what Fincher brought to the film. Along with Trent Reznor’s moody score, it’s Oscar winning editing, and flawless direction, the film is one of the best mystery-thrillers in the past few years. The real star, however, is Rooney Mara who gave a career-making performance and simply impressed everyone with how powerful she is in this role. It is a crime that she did not receive the Oscar this year. The only problems I have with the film stem from the book’s inconsistencies and outlandish revelations, but this is the best interpretation of the book I have seen. I can only hope Fincher returns to finish the trilogy, I would love to see what he does with it.

Woody Allen returns to form after a couple of duds with Midnight in Paris, easily his best film in nearly a decade after his much more dramatic Match Point. This takes Allen more back to his roots with some witty and original dialogue thrown into a cinematically wonderful story. A great romantic film about nostalgia and a love for the arts. A terrific cast, headed by Owen Wilson in his best role yet, is clearly having a lot of fun here – and how could you not with such an original script like this? 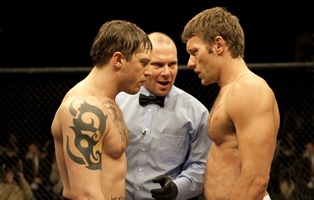 Put simply, I loved this film. The trio of actors – Tom Hardy, Joel Edgerton, and Nick Nolte – give terrifically effective performances here, making the film more unforgettable than it should be. While not being a fan of the mixed martial arts sport that has become fairly popular, I still found the fight scenes in this film enthralling. The choreography and the actors’ physicality is something to be commended. Nolte deservedly received an Oscar nomination for the film, and I am glad to see the notice Edgerton & Hardy have received for the film. Warrior is an entertaining and emotional triumph that could be enjoyed by the whole family.

I have to say, I never thought the fourth film in the Mission: Impossible series would be even close to my favorite films of the year. I was a fan of the third installment when JJ Abrams brought some much-needed life to the franchise, but director Brad Bird (The Incredibles) has nearly perfected what the franchise should be with Ghost Protocol, his first live-action film. The film is almost literally a sequence of fantastic action set pieces, but the script is able to drive the story forward while giving us more insight into the characters through the action. I love a good action movie, but it truly amazed me how creative and jaw-dropping each of these set pieces are – from the Kremlin bombing to Tom Cruise scaling the Burj Khalifa tower to a high-speed foot/car chase through a sandstorm. Brad Bird certainly proved himself as a live-action director here with what may be the best action movie of all-time. If only the villain had more of a presence in the film.

We have all seen this movie before, a man’s life is turned upside down when he finds out he has a fatal disease. It was recently done in the just-plain-awful Funny People (also starring Seth Rogen), but not until 50/50 has this story been told so honestly and so effectively. Along with the wonderful script penned by Will Reiser (based on his actual experience being diagnosed with cancer), the film triumphs because of its superb cast, lead by Joseph Gordon-Levitt, Anna Kendrick, Anjelica Huston, and Bryce Dallas Howard. Levitt is fantastic here, seeming to get better with every film he does. Giving great performances in (500) Days of Summer, Inception, and Hesher, it won’t be long until he is recognized for his work by the Academy. This is the most emotionally honest and heartfelt film of the year and it didn’t have to be overbearing or sappy to do it.

For those of you who read this blog, it should come as no surprise that this is my favorite film of the year. Nicholas Winding Refn’s Drive is an amazing film. Reminiscent of Peter Yates’ Bullitt and Michael Mann’s Thief, this is a film noir that cares about its characters and their journey. Ryan Gosling gives one of his strongest performances as The Driver, a Hollywood stuntman who moonlights as a getaway driver. We know almost nothing about this character except that he is very good at what he does. The music, the action, the perfect direction, the performances, the story all come together perfectly here. I have absolutely nothing negative to say about this film. I have seen it numerous times and find something new to appreciate each viewing, especially when it comes to Albert Brooks in this film. His character is all at once tragic, heartbreaking, terrifying, and despicable. It is such a brave and original performance for Brooks, I cannot believe it went unnoticed when it came to awards season.

If you want to see something different, or you just enjoy original filmmaking, do yourself a favor and go buy Drive.

Shame – Would have been my #11. Transcendent performance by Michael Fassbender and features some fantastic filmmaking by Steve McQueen.

The Ides of March – Great film, exactly what I want out of a political thriller. Elegant direction and features a fantastic performance by Gosling.

Rango – Much better than I was expecting, ended up being a homage to the classic Spaghetti Westerns. I simply loved it.

The Descendents – Good film, far from Alexander Payne’s best. Clooney’s performance was the highlight, but didn’t stick with me much emotionally.

Fright Night – The most fun vampire flick I have ever seen, also features a scene-chewing performance by Colin Farrell.

Hugo – Surprising little movie that had a fantastic last half, just didn’t make the cut.

Crazy, Stupid, Love – Best romantic comedy of the year. Disappointing last 10 minutes, but it is hard to beat the pairing of Steve Carell and Ryan Gosling

The Tree of LIfe – Great Terence Malick film, not his best, but a very original film that you won’t be likely to stop thinking about days after.