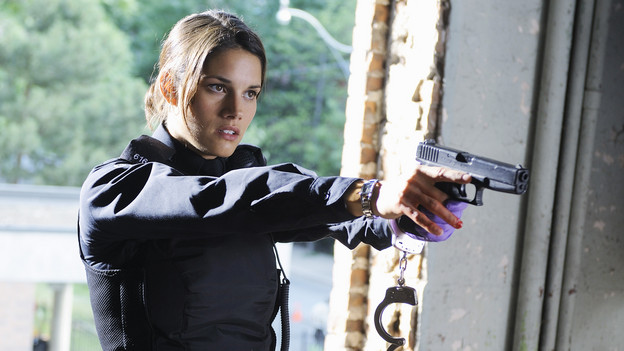 ABC and Global have jointly announced the renewal of the summer’s popular drama series, “Rookie Blue,” for a third season. Season Three is currently in development and will move into production in Toronto later this summer.

For ABC, the series ranks No. 1 in Thursday’s 10 o’clock hour in Adults 18-49 this summer, finishing No. 1 in its time slot on each of its three original telecasts. Moving to the 10 o’clock hour in its sophomore season, “Rookie Blue” is producing year-to-year gains for ABC, improving by 8% in Total Viewers and by 14% in Adults 18-49 from the Net’s Summer ’10 averages in the hour. In fact, with viewers and young adults, “Rookie Blue’s” sophomore season premiere (on June 23) posted ABC’s best summer numbers in the hour with regular programming since August 2008 (August 7).

“Rookie Blue” was developed by Thump Inc. and produced in partnership with leading indie studio and distributor Entertainment One. The series is executive-produced by award-winning Tassie Cameron (“Flashpoint”), Ilana Frank (“The Eleventh Hour,” “Would Be Kings”), Noreen Halpern (“Hung,” “Call Me Fitz”), John Morayniss (“The Firm,” “Haven”) and David Wellington (“The Eleventh Hour,” “Wold Be Kings”).

“Rookie Blue” follows five young and ambitious rookie cops who navigate the emotional trials and tribulations of their professional and personal lives. Last summer these rookies hit the streets for the first time with their training officers and learned how to walk the thin blue line. Now the training wheels are off – more experienced, they’re ready to kick some serious butt. But these rookies are just beginning to realize there are no shortcuts to becoming good at this job. And when you’re a rookie officer, a little knowledge is a dangerous thing.

“Rookie Blue” airs Thursdays at 10:00 p.m., ET on ABC. In Thursday’s July 14 episode, “Heart & Sparks,” as the 15th Division tries to recover from the attack on Detective Callagan, a series of arsons culminates in the torching of a laundromat. The list of suspects grows, as Chris and Gail take to the streets and encounter a man from Chris’ past, while Traci interrogates a young firebug found at the arson scene. Meanwhile, Andy’s effort to stop the grieving widow from entering the burnt-out laundromat results in the two women being trapped in the unstable building, and what seems like a straightforward case of arson ends up being something much bigger.

“Rookie Blue” is available on ABC.com the day after airing on the network for users to watch online. For more information on “Rookie Blue,” please visit ABC.com.