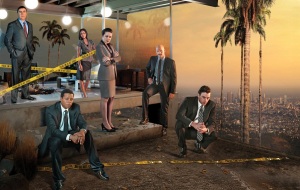 Last week we saw the new reboot of Law & Order: Los Angeles, which is now simplified to Law & Order: LA. With that change came a new opening credits sequence similar to the other Law & Order series as well as cast additions and departures. Gone are Skeet Ulrich, Megan Boone, and Regina Hall. However, Alana de la Garza who played Connie Rubirosa in the final four seasons of the mothership series came aboard as Jonah Dekker’s (Terrence Howard) new D.D.A. It seems like the show has a bit more life, and this reboot might have been what the doctor ordered.

The change definitely can be felt. The first 8 episodes of the show didn’t feel too much like Law & Order. The “dun-dun” sounds weren’t in the transitions, there wasn’t an opening narration in the first few episodes, and the show felt too formulaic without the grittiness fans expected. It wasn’t all bad though. The characters of Det. Rex Winters (Ulrich) and Det. “TJ” Jaruszalski (Corey Stoll) had great chemistry together, bringing references to the camaraderie of Det. Briscoe (Jerry Orbach) and Logan/Green (Chris Noth/Jesse L. Martin) in the original series. The thing that really hurt the first few episodes of the series were that the scripts and acting felt rushed. The show didn’t start shooting until very late in the summer, leaving very little time for re-shooting or any of the breathing room that they got later on.

The new episodes feel though like an old pair of shoes that just got re-shined. With Ricardo Morales (Alfred Molina) leaving the D.A.’s Office and returning to his old job as a detective, it brings a new look at the profession and uses his skills as a prosecutor in the interrogation room. The main thing I hope to see in the reboot is that later in the year (or even next year if the show gets renewed) is promoting Peter Coyote to full-time status as D.A. Jerry Hardin. This D.A. is a lot more politically driven then the D.A.s that we saw in the original series, and would give Arthur Branch (Fred Dalton Thompson) a run for his money.

But the reboot still needs to prove itself throughout the rest of the season. While the early episodes have started out strong, it remains to be seen if they continue this momentum for the remainder of the year. Also, I really want to see how they will air the leftover Ulrich episodes as there are roughly 4 more episodes that involve the old cast that need to be shown.

I don’t think NBC made the right choice airing the show on Mondays, the network’s weakest night (not that the Peacock has many strong nights), and it will remain to be seen if the show will get a second season. I, honestly, was not a big fan of Version 1.0 and didn’t watch many of the episodes when they first aired. Now that the reboot has brought back the charm of the original series, however, I think I’ll give the show one more chance.