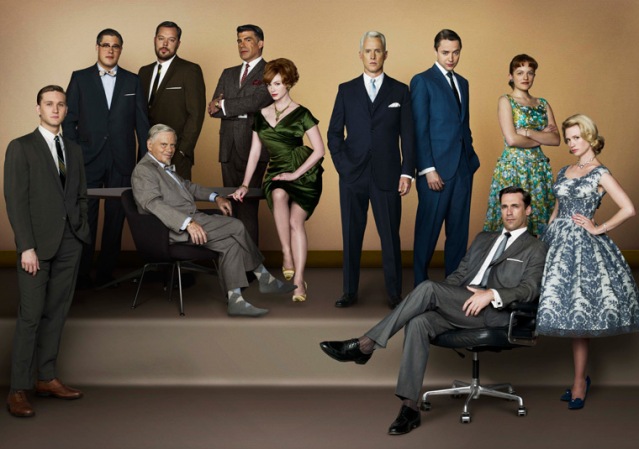 Although the delay of AMC’s Mad Men is a bit sad, today fans of the drama were given great news: the show isn’t just renewed for season five, but AMC has given season six an approval too!

New York – March 31, 2011 – AMC and Lionsgate today announced the return of the iconic series “Mad Men” for seasons five and six with series creator Matthew Weiner back on board as showrunner.  Concurrently, it was announced that Weiner has signed a new long-term deal with Lionsgate, extending into a possible seventh season.  The announcements were made by Charlie Collier, president of AMC, and Kevin Beggs, president of Lionsgate Television Group.

When AMC debuted “Mad Men” in July 2007 it quickly became one of the most talked about series on television. Set in 1960s New York, “Mad Men” is a sexy and provocative original drama that follows the lives of the ruthlessly competitive men and women of Madison Avenue advertising. Produced by Lionsgate, “Mad Men” has made television history as the only cable series to win the Emmy Award for Outstanding Drama and the Golden Globe for Best Television Series-Drama for three consecutive years.

“I want to thank all of our wonderful fans for their support.” said Weiner. “I also want to thank AMC and Lionsgate for agreeing to support the artistic freedom of myself, the cast and the crew so that we can continue to make the show exactly as we have from the beginning.  I’m excited to get started on the next chapter of our story.”

“AMC’s original programming began with a mission to create bold storytelling of the highest quality, and ‘Mad Men’ was the perfect expression of that commitment. We’ve been proud to support this show from the day we read Matt’s ground-breaking pilot script and have loved building it with Matt and Lionsgate into the cultural phenomenon it has become,” said Collier. “For everyone involved in the show and its passionate fans, we are thrilled to announce that the series will continue on AMC under the exceptional vision of Matt Weiner.”

“We are proud to continue our successful relationships with AMC and the brilliantly talented Matt Weiner, whose vision has created one of the most distinguished series on television,” said Beggs. “We also appreciate the passion and patience of ‘Mad Men’ fans around the world who have been awaiting this good news, and we believe they will be rewarded with many more seasons of this extraordinary and groundbreaking series.”