Blu-ray Review: “The Next Three Days” 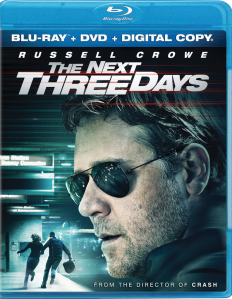 Russell Crowe and Elizabeth Banks star in The Next Three Days, a film that asks the question, “How far will you go for the one you love?” Crowe stars as John Brennan, who’s wife Lara is arrested for the murder of her boss. After being incarcerated for three years, John decides that he needs to break his innocent wife out of prison so the family can be together and happy again.

John gets advice from Damon Pennington (Liam Neeson), a man who escaped from prison seven times before finally giving up. After getting the vital information and setting up the plan, John follows through with his plan as he alters his wife’s health records in order to transfer her to the hospital where he breaks her out.

Everyone in the film brings their A game to the table which includes Brian Dennehy who plays John’s father in the film. While Dennehy’s character has only a few lines, his body language was just as powerful as anything he could’ve said in his lines.

Both Crowe and Banks both give strong performances, and with Banks not doing too many dramatic roles, shines even more acting up against Crowe and Dennehy. Seeing her character transform from a happy and upbeat wife to an inmate focusing on getting out through an appeal to giving up hope and becoming suicidal, it is my sincere hope that we see her in more of these roles in the future.

My biggest sadness is that Neeson’s role wasn’t bigger in the film. I believe they filmed this as they were doing A-Team, and Neeson was kind enough to do his shot over a brief few day period, but having him in more of the film would’ve been a treat for the production team and the fans.

Based off the French film, Pour Elle, the American remake is a little bit darker, but nonetheless a straight action-thriller that is a fun watch, but nothing too extraordinary. The picture quality on the Blu-ray is amazing as well as the sound quality, and the bonus features easily make the $20 MSRP reasonable for the film. If you can find the movie cheap on Blu-ray or can rent it, you won’t be disappointed.