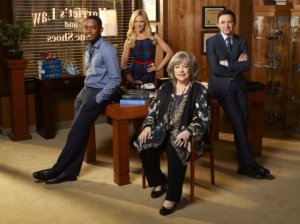 Synopsis: Harriet Korn (Kathy Bates) is recently fired from her successful job as a patent lawyer and starts up her own law firm in a shoe store.

Review: Harry’s Law, from creator David E. Kelley (Ally McBeal, Boston Legal) became a target of critics before the show even started. Many conservatives have disliked Kelley’s left-wing political “soapbox” agendas that his characters have used in their trials for years. However, his shows somehow still become successes. The same can be true with the future of Harry’s Law.

Pilots are never perfect, and I feel this episode could’ve been better as a two hour premiere (and no one watched The Cape last night anyways). The episode starts off with Harriet Korn smoking a joint in her office at a fancy patent law firm. Her boss fires her and she realizes that she needs a fresh start. As she is walking down the street, a man falls onto her and she is rushed to the hospital. The man is Malcolm Davies (Aml Ameen), who tried to commit suicide. As Harriet leaves the hospital, she is then struck by rival patent lawyer Adam Branch (Nate Corddry). After escaping both incidents without injury, she opens a law firm in a closed up shoe store with her assistant Jenna (Brittany Snow).

Within hours of opening, Malcolm comes back needing Harriet’s help in defending himself against possession of an illegal drug, which would be his third strike and ruin his chances of finishing college. Meanwhile, Damien (Johnny Ray Gill) offers his services in protecting the firm since they are located in a poor neighborhood, and after Harriet rejects paying for the services she does offer her own legal services for free once he is arrested as long as he can protect her office.

In court, Harriet goes up against Josh Peyton (Paul McCrane), the prosecutor who likes to repeat himself. He won’t give up a deal and the trial focuses on one young man’s last chance for a good life, which although the jury finds him guilty, the judge gives him one chance to pass a drug rehab program or face two years in jail. Malcolm becomes Harriet’s new paralegal and promises to watch over him carefully while he is in the program.

Finally, Damien ends up arrested after shooting someone trying to rob the local laundromat. Adam, who forcefully hires himself into the firm, defends Damien, who responds well to Adam, telling him that no one has ever stood up to him the way he has.

The show definitely still needs to find its tone. While Boston Legal took half a dozen episodes to realize where it was going with its humor, Harry’s Law doesn’t have that luxury. The show debuted midseason, and although the pilot premiered to a large audience, the show doesn’t have too long to prove itself.

There were faults in the episode, most notably Jenna’s lack of lines (she really just gave blank stares a lot), and the plot felt rushed, but overall the show has promise. Being a fan of everything David E. Kelley, I think the show will find its roots soon.