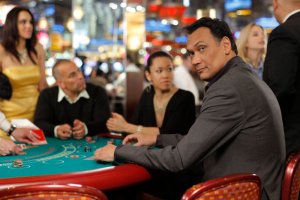 NBC has stopped production on their struggling series Outlaw that stars Jimmy Smits. The series has had dwindling ratings and the network put the show in the ‘Friday night death slot’, signaling that they didn’t have too much faith in the series anyways. Reviews have been mostly negative as well, so the show is probably dead.

Three episodes have aired with the final five to be closely watched by NBC. If ratings do happen to go up , the network may resume production. But the chances of that are slim to none.