In time for the holidays comes the release of the fourth season of the 1990s hit sitcom, Boy Meets World. The first three seasons were re-released earlier this month and have flown off shelves, showing Lionsgate that there is enough interest in finishing off selling DVDs of the beloved series.

You can purchase the fourth season on December 7th, and rumors are swirling that there will be some cast reunions on certain talk shows to help promote the DVD sales. Take a look at the cover art below and start counting down the days until you can revisit Cory, Topanga, Shawn, and the rest of the gang! 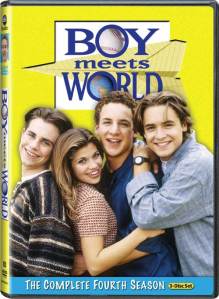