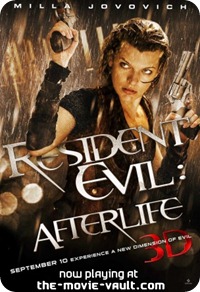 Review:
I had the “pleasure” of seeing this film at a pre-screening last night and I can definitely tell you this…thank God it was free. The Resident Evil films have shown a rapid decline in quality since it’s first outing in 2002 (which I actually found to be pretty entertaining). This installment truly takes the cake though.

Writer/director Paul W.S. Anderson returns to the helm for the first time in the series since the original film. He writes and directs this film as if he was in a competition with the last two installments to make a worse film. The first had some legitimate scares and an interesting story, the following 2nd and 3rd had some decent action scenes here and there, but were overall completely forgettable. This fourth (and hopefully but not likely final) film raises the bar in awful storytelling, less-than-cardboard performances, and yawn-inducing action sequences.

Many things in the film are left unexplained, the action scenes all seem like a rehash of The Matrix (including the main villain of whom does his best Agent Smith impression).  It is hard to find a scene in this film where at least one aspect of it is not in slow motion. There was so much slow motion in this film that it literally got to the point where it got awkward. There was about five minutes of slow motion of Ali Larter doing a back-flip and just landing on the ground.

As for the acting, there really isn’t any. Wentworth Miller (Prison Break) gave this movie some credit once his name popped up…but then you find out he ends up playing a prisoner trying to break out of his cell. Yeah, that’s not even a joke. Also, he tries on his best Dirty Harry impression throughout the film, which ends up being one of the most unintentionally funny things about the film. Jovovich does what she’s done throughout the last couple of films; walk around killing people and speaking in a monotone voice. Ali Larter is given absolutely nothing to do and Kim Coates shows up for a while, who knows why he chose to be in this film.

And now for the good stuff. The 3D really looked amazing in some scenes.

Overall, this isn’t an unbearable movie to sit through unless you have a couple of buddies around and you are able to make fun of it. The acting is horrible, the action is boring and unoriginal, and there is no real story.

Something to watch for: Good drinking game – take a drink every time there is a slow motion sequence begins.

Rating: R for sequences of strong bloody violence and some language