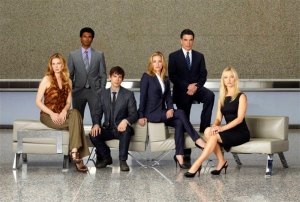 No real surprise here. USA Network announces today that they have renewed freshmen series Covert Affairs for a second season. The series has been called a newer version of Alias and has been a hit with viewers and critics alike. The series is USA’s third best show this summer (behind Royal Pains and Burn Notice), and also the #3 show among all cable in the coveted 18-49 demographic.

In COVERT AFFAIRS, Annie Walker (Perabo) is a young CIA trainee who is suddenly thrust into the inner sanctum of the agency after being promoted to field operative.  While it appears that she has been hand-picked for her exceptional linguistic skills, it may be something from her past that her CIA bosses are really after.  Gorham plays Auggie Anderson, a CIA military intelligence agent, blinded while on assignment and Annie’s guide in this world of bureaucracy, excitement and intrigue; Gallagher plays Arthur, the formidable Director of Clandestine Services for the CIA; Dudek plays a married mother of two and is and Annie’s older sister; Matchett plays Joan, head of the CIA’s Domestic Protection Division who happens to be married to Arthur; and Ramamurthy plays Jai Wilcox, an agent with a rich family history within the walls of the CIA.

USA Network is the #1 network in all of basic cable and is seen in over 98.5 million U.S. homes.  A division of NBC Universal, USA is the cable television leader in original series and home to the best in blockbuster theatrical films, acquired television series and entertainment events. The award-winning USA website is located at www.usanetwork.com. Characters Welcome.