Bruce Willis to be Villain in ‘Expendables’ Sequel? 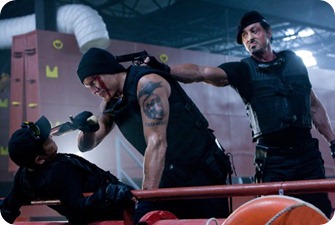 It looks like my dream has come true. For those of you who have not spoken to me personally about how much I loved The Expendables, I am very much looking forward to a sequel in which Bruce Willis’ character would be the villain, making Stallone’s team would pair up with Schwarzenegger’s (which would include Kurt Russell and Jean Claude Van Damme). Today we get an interview with Stallone himself talking about the proposed sequel.

"If you’re on a winner you just stay with it," Stallone told KISS FM. "It would be great to get the guys back, and maybe get some of the other guys who weren’t in it – like Van Damme and whatever – to be in it, and then bring in some young bloods, and have Bruce Willis as the villain. I said ‘Bruce, chasing you for two hours? that would be great! I can get behind that."

Stallone also wants Arnold Schwarzenegger to return in a bigger role. Other names that were previously thrown around were Kurt Russell, Steven Seagal and Danny Trejo, who was set to star in the original until Stallone screwed him over.