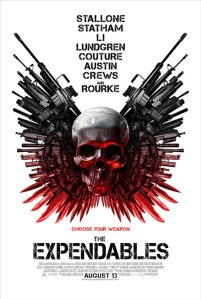 If you could create the best action movie of all time without worrying about plot (because we all know action movies usually rely more on body count than an actual story), The Expendables probably isn’t too far off from the top of the list. Sylvester Stallone writes, directs, and stars in this film as Barney Ross, the leader of The Expendables who goes to Vilena to try and help rescue the daughter of the general and save the country from destruction from an ex-CIA agent (Eric Roberts).

Helping out Ross is Lee Christmas (Jason Statham), Yin Yang (Jet Li), Toll Road (Randy Couture), and Hale Caesar (Terry Crews). Each member of the team has a different specialty and weapon that they use for combat. What’s great about this movie as that they rely more on their hand to hand combat and bring back the old school type of action film, that doesn’t need any special hi-tech gadgets to help them out.

As stated earlier, the film does lack in the plot department. While the general ‘save the girl’ premise is there, for a film that is 103 minutes, there certainly are some scenes that are purely just for the body counts and some extra male bonding moments. Some minor characters in the film played by Dolph Lundgren and Mickey Rourke were great presences, but did not add too much to the film minus these male bonding moments. Lundgren is given some nice action scenes, but Rourke seemed very out of place, given really nothing to do but spurt out some poetic lines.

The most talked about scene from the movie is probably the cameo with Bruce Willis and Arnold Schwarzenegger, who meet Stallone’s character in a church. These lines are probably the best in the film, and I won’t spoil it for you, but you wish there was a bit more to the scene. Many people will say, “Didn’t Bruce and Arnold get billed pretty high in the trailers?” The answer is yes, but it was the production company’s way to draw you to the film, and for those who think that they star in the film will be disappointed. But don’t be fooled, the scene with the 80’s and 90’s action stars is amazing.

Overall, this film will not disappoint if you want some blown up bodies, seeing pretty much every great action star in one film, and don’t care too much about an overall plot. A sequel is already in the works, so get ready for more action in a few years from these men.