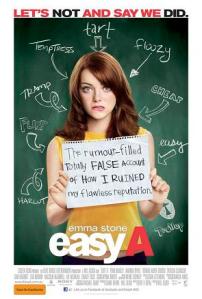 So in what could be Amanda Bynes’ final film, I present to the trailer to the comedy Easy A. The film follows Emma Stone’s character, who sees her self as a nobody, who helps loser guys pretend to lose their virginity. However, a group of students (including Bynes) try to run her out because they feel she is trash and diminishes their school’s good name. They make Olive (Stone) wear a big red A on everything she wears (referring to the adulterer in The Scarlet Letter), but she uses this to her advantage to become a somebody at school. The film comes out on September 17th. Enjoy the trailer and let us know what you think!

The film also stars many actors with the letter ‘A’ in their name to coincide with the heavy promotion of the ‘A’ in the film (going back to The Scarlet Letter reference). They include (and are featured in the trailer): Penn Badgley, Thomas Hayden Church, Stanley Tucci, Lisa Kudrow, Patricia Clarkson, Cam Gigandet, Malcolm McDowell, Alyson Michalka, Dan Byrd, Johanna Braddy, and Stacey Travis.