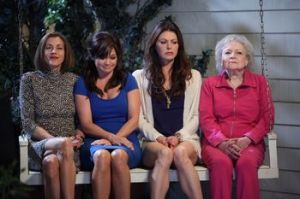 Nearly 5 million viewers tuned in to see the premiere of Hot In Cleveland last night, which broke records for TV Land. The previous high for the network are reruns of Everybody Loves Raymond that get roughly 1 million viewers an episode, and the network itself averages roughly 800,000 viewers a night in primetime. Many contribute the success to the phenomenon that is Betty White. Regardless, this series is headed in the right track. TV Land’s press release follows:

TV LAND’S FIRST ORIGINAL SITCOM “HOT IN CLEVELAND” SCORCHES IN THE RATINGS, MARKING HIGHEST RATED AND MOST WATCHED TELECAST EVER IN NETWORK HISTORY

Nearly 5 Million Total Viewers Tune In To The Series Premiere

New York, New York, June 17, 2010 – TV Land’s critically-acclaimed first original sitcom “Hot in Cleveland,” got off to an extraordinary start for its premiere (Wednesday, June 16th at 10 p.m ET/PT), making network history as the highest rated and most watched telecast ever, according to Nielsen Fast National data. “Hot in Cleveland” broke network records and attracted nearly 5 million total viewers and gave the network stellar, significant triple digit gains across all demos for the night.

TVLand.com also experienced record-breaking traffic, attracting 287,000 unique visitors, making it the most-visited day in site history. There were 117,000 visitors alone to the “Hot in Cleveland” show pages, in addition to thousands of fans interacting with the show on Facebook.

“Hot in Cleveland” revolves around three fabulous best friends from LA – novelist Melanie Moretti (Bertinelli), eye-brow archer to the stars Joy Scroggs (Leeves) and former soap star Victoria Chase (Malick) – who find their lives changed forever when their plane, headed for Paris, makes an unexpected landing.  When the friends discover that they are hot in Cleveland, they decide to stay.  Starting over, they rent a house that happens to come with a very feisty caretaker (White).