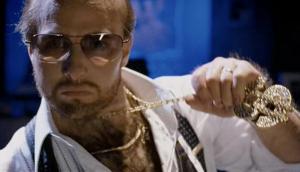 Tom Cruise first showed up as obnoxious studio executive, Les Grossman, in Tropic Thunder. Since then, the character has been a big hit and showed up all over last night’s MTV Movie Awards. There is some speculation that Cruise would not got through all of this work (spending hours in a make-up chair for the character) simply just to entertain an audience, but that there is actually a film in the works based on the character.

After the show, Cruise was approached by E! Online as was asked if he is planning to bring Grossman back to the big screen. “We’re working on it,” replied the actor.

So will we see Les Grossman film? If so, would you check it out?