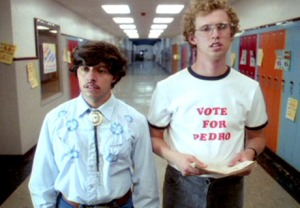 Fox is developing an animated television series to be based on the very popular 2004 film, “Napoleon Dynamite”. Most of the original cast has already gotten on board to lend their voices to the series. Jon Heder, Efran Ramirez, Aaron Ruell, and Jon Gries will all return respectfully as Napoleon, Pedro, Kip, and Uncle Rico. Director of the original film, Jared Hess will be closely involved with the series as well.

At the moment, there is no word on when the show will appear on television, but we can all hope this leads to a necessary cancellation to the dreadful “Cleveland Show”.