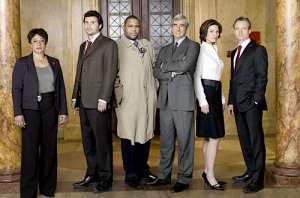 Synopsis: Detectives Lupo and Bernard (Jeremy Sisto and Anthony Anderson) investigate the mysterious murder of an heiress. To make matters worse, it seems there is a pattern about waiting to kill rich citizens so their inheritances are much higher.

Review: Season 20 has been pretty much hit and miss this year. It doesn’t help that the network has shuffled the series from a Friday at 8:00 PM timeslot to Monday at 10:00 PM. Audiences find it hard to find the series, so it puts pressure on the writers to produce intense episodes. Some have fallen flat. This one, however, is a bright spot.

The episode was very dark, and reminded me of the great episodes from the mid to late 90s, which great depth and intrigue. We find out if some wealthy citizens wait to “kill” their relatives until the next year, their inheritance goes tax free, so they get more money. The episode is full of greed so EADA Cutter (Linus Roache) and ADA Rubirosa (Alana de la Garza) pull no stops in trying to convict.

The only downfall to this episode was the continued lack of use of DA McCoy (Sam Waterston). I think it really hurt the writers to make him the politician he never wanted to be. Sure it works in some areas, but it seems his old spark is lost. He really doesn’t help his ADAs much and is more grumpy than the previous DA. They should try and use his character more, or even throw him back into the courtroom for an episode.

Also underused was Lt. Van Buren (S. Epatha Merkerson), who has had the cancer storyline all season. It looks like next week will deal heavily with her, but we haven’t seen much of her lately. She has been a vital part of Precinct 27 since the fourth season, it would be nice to see her more often than not.

The series has a lot of kinks to work through before it hits the airs for the remarkable 21st year of the series. This episode is a step in the right direction.