Ricky Gervais to return as host for Golden Globes 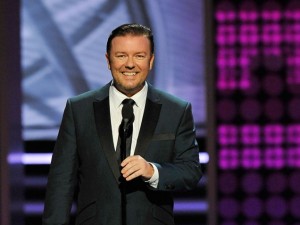 After some maybe sad news for fans of the US version of The Office, I offer you great news for fans of the original. Ricky Gervais, the British comedian known for launching the successful The Office brand (along with creating the American remake among many others) and his current film career (The Invention of Lying, Night at the Museum) will return as host of The Golden Globe Awards in 2011.

After an impressive stint as host this year (along with adding nearly 2 million viewers), it seemed obvious that Gervais would get the call back for a second hosting gig. This past Golden Globes was also the first time there had been a host in fifteen years of the awards show.