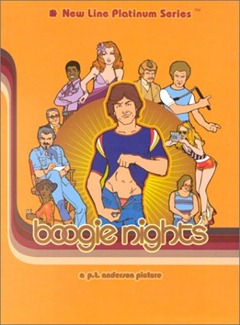 As you can see, I am changing what used to be “Action Movie of the Week” to simply “Movie of the Week”…seeing as how not everyone likes action movies. So from now on, I will be recommending a movie I love in hopes of spreading love for great cinema. This week’s film is one of my personal favorites, Paul Thomas Anderson’s BOOGIE NIGHTS.

The film focuses on the pornography film industry in the 1970s. Yeah, I know, it may not seem like the most intriguing or likeable film for me to recommend. However, I can guarantee that you have never seen a film like this before; it is engaging, emotional, tense, funny, and even hard to watch at times. The film plays like ‘Goodfellas’, only instead of gangsters we look into the world of pornography.

This was Paul Thomas Anderson’s second film, after ‘Hard Eight’. For those of you who haven’t heard of him, he is the writer/director of films such as ‘Magnolia’, ‘Punch-Drunk Love’, and ‘There Will be Blood’. While these films may not be the easiest to watch or even the happiest, they are consistently engaging and a wonder to watch from a filmmaking standpoint. The man works his camera like Scorsese, works with ensembles like Altman, and writes his dialogue like Tarantino.

Along with a terrific script and glorious cinematography, Anderson pulled in quite an amazing cast (as he usually does). Starring in the film are such big names like Mark Wahlberg, Burt Reynolds, John C. Reilly, Heather Graham, Julianne Moore, Tom Jane, Philip Seymour Hoffman, Don Cheadle, Philip Baker Hall, William H. Macy, Alfred Molina, and Luis Guzman. Nearly all of these actors have gone on to be nominated for Academy Awards, if not actually won. Reynolds himself was nominated for Best Supporting Actor in this film.

Some may believe that ‘There Will be Blood’ is Anderson’s best film, and while it was definitely the best film of 2007, I have to say that ‘Boogie Nights’ is his finest film. This is just one of the most original and well-made films ever. I seem to always be able to count on Paul Thomas Anderson and I definitely look forward to his next film starring Philip Seymour Hoffman and Jeremy Renner (The Hurt Locker). I urge anyone who enjoys seeing something they have never witnessed before to check out this film.