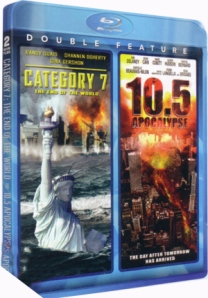 From here on out I will do a review of a random Blu-ray every week. Some will be newer movies, some will be older that have been released on Blu-ray. This week is the Double feature of Category 7: The End of the World and 10.5: Apocalypse, both miniseries and both sequels of Category 6: Day of Destruction and 10.5. I’m going to review them each separately.

Category 7: The End of the World – This miniseries aired on CBS in 2005 and starred Randy Quaid (Kingpin, Independence Day), Gina Gershon (Cocktail, Showgirls) and Shannon Doherty (Beverly Hills 90210, Charmed) that follows this cast as they try to recover after sudden storms and to try and save people across the world. This miniseries is definitely the weaker of the two, trying to cash in on The Day After Tomorrow and using the then-current global warning issue as a focal point of this miniseries.

While this might be the weaker of the two, the CGI and special effects are still pretty decent for a miniseries on television. However, because of a weak plot point, and iffy acting, this miniseries probably won’t be that memorable for much longer (or if it even still is now).

10.5: Apocalypse – Airing in 2006 as the sequel to the hit 10.5, Kim Delaney (Army Wives) returns as Dr. Sam Hill, as this mini-series takes place right after the predecessor. The earthquakes don’t seem to be stopping, and are currently changing the shape of the United States. With the help of her father, played by Frank Langella (Superman Returns) they try and stop the quakes from destroying the US. Also starring Beau Bridges (The Agency) and Dean Cain (Lois & Clark: The New Adventures of Superman).

I saw this miniseries when it first came out, and was a fan of the original. The CGI holds up well in the Blu-Ray transfer, however, the special effects do seem a bit dated. This miniseries is definitely the stronger of the two, with better acting, a stronger plot, and a more realistic portrayal of science (although both miniseries are far fetched).