When will we see another bond film? 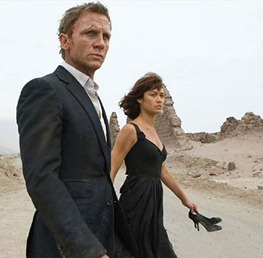 Who knows. Producers Michael Wilson and Barbara Broccoli announced that they have suspended any development on Bond 23, which was scheduled for theaters in 2011.

They said: "Due to the continuing uncertainty surrounding the future of MGM and the failure to close a sale of the studio, we have suspended development on ‘Bond 23’ indefinitely. We do not know when development will resume and do not have a date for the release of ‘Bond 23.’"

The last news we had on the film was that Sam Mendes (American Beauty, Road to Perdition, Revolutionary Road) was attached to direct. Rachel Weisz (The Mummy) and Michael Sheen (Frost/Nixon) were rumored to have been cast.

No one is sure what is in store for Bond at the moment, although I almost positive that this will be Daniel Craig’s last outing, according to his contract. It will be sad to see him go, but hopefully he goes out on a positive note.