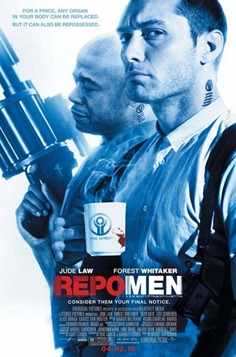 Synopsis:
In the future, an organization known as The Union employs men to repossess artificial organs their customers are unable to pay for.

Review:
Just right off the bat, I have to say this is not a great movie, but I love a good action movie and there is no doubt that is what this movie delivers.

After first seeing the previews for this film, I thought it looked like a decent action flick with an interesting premise. I was not disappointed. While more character and plot oriented than I expected, it certainly does not hold back on the action. With a fantastic opening scene that sets the mood for the rest of the film, you are dropped into this detailed world where if you have an artificial heart, you better be able to pay for it…or these guys will take it straight from your body while you are sitting in your house.

Jude Law isn’t exactly the guy you picture shooting, fighting, and cutting his way through dozens of people in a film like this. But rest assured, he is bulked up and perfected his moves to pull of a more than convincing action hero. It also doesn’t hurt to have him in the more dramatic scenes, where he is definitely more comfortable and impressive. Forest Whitaker also gives a great performance here as Law’s best friend and partner, straying from being the evil villain and playing it to a more human aspect. Liev Schreiber plays more the evil villain part, but he is still fun to watch in a part like this.

This film is extremely well directed and Sapochnik shows extreme promise visually and stylistically. This being his directorial debut, it is levels above many directors we have seen in recent years, especially with many not being able to shoot action scenes as well as Sapochnik does here. I have to say I am excited to see what he does next. On another note, someone has to give major credit to the music supervisor on this film. There are very few films that have music so perfectly compliment and fit the film itself. The mixing of jazz music, Rosemary Clooney, and the somewhat techno that plays in the final action set piece with this violent Sci-Fi flick is simply genius. The blending of in-house surgery and jazz fits beautifully somehow and makes the violence seem less grisly.

Now down to the good stuff. The action scenes are very well shot and choreographed. There is no holding back on the violence and most certainly the blood. While this is definitely the most violent movie I have seen in recent memory, it is never in-your-face or overly gruesome like the so-called “horror” films of this past decade. There is a scene towards the end that is especially impressive with an obvious ‘Oldboy’ homage with a western influence. Speaking of an homage, couldn’t help but get the feeling of Cronenberg influence in a grisly but effective scene near the end.

I have to admit that I had a lot of fun with this film, seeing such serious dramatic actors in such a crazy film like this added to the fun. If it wasn’t for the last two to three minutes of the film, where some great scenes and character development is wasted in such a pointless way…this would have been a truly great action flick. I don’t know if that is how the book this was based up on ended, or the screenwriters couldn’t help themselves…but either way, someone should have caught it and fixed it. Overall this is a pretty intelligent action flick with plenty of blood and involvement with its characters to make it worth the money.